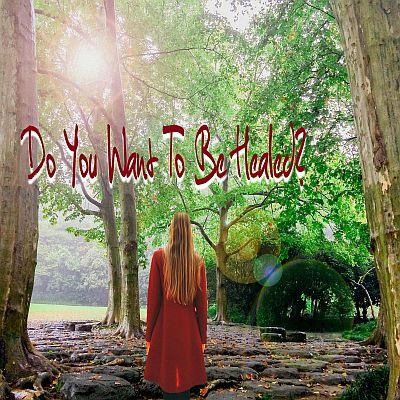 The music album, “Do You Want To Be Healed” happened over the course of 3 years. On January 10, 1993, I received a prophecy saying, “…..There will come a time when you will make a tape so anointed with My power that those in insane asylums will be set free.” That was a tall order but in faith, we stepped out to believe God for what He wanted to accomplish through us. Little did we know years later, when the album would actually be released, the silent hurting was not in insane asylums but would seek suicide to rid themselves of the horrors they experienced.

My husband, before his death, John Persichitte, began fasting and praying over the project a week before I began – all while working 12-hour days. I spent concentrated time with the Lord and He gave me specific instructions on how to prepare myself. For 4 days I ate nothing but bitter herbs, lamb, unleavened bread and drank grape juice. The lamb represented Jesus. The unleavened bread with its baked-in stripes stood for Jesus’ sacrifice he bore for our healing. The grape juice represented the blood of Jesus spilled to redeem us, allowing us to walk in His righteousness. The blood washes away our sin.

I secured a babysitter for a week and I went to an Intercessor’s home to use their piano and prayed, worshipped and composed as the Lord directed. On February 8-11, 1993, I spent 5 hours per day with the Lord. On the 12th, I spent 3 hours with Him worshipping over all He created in the 4 previous days.

The first day went smoothly, I thought; but the writing was a collaboration between me and the Lord. I felt heartsick because I didn’t think of myself as an accomplished songwriter and this project wasn’t going anywhere if I had any of me in it. I wanted only Him, but I wasn’t sure how to do it.

That first song, the album title, came from teaching I’d heard my pastor’s wife at the time, Susan Moore of Sojourn Church, Carrollton, Texas, give about the very question the Lord Jesus asked someone coming to Him for healing. it struck me as a very odd question at the time but now I understand better. People want to be healed until they realize it will change their life to one of greater responsibility and accountability and service to Him who healed them. What does “being healed” mean to you?

(These stories about the songs written for this project were typed onto the cassette album jacket. That’s how I can remember so well. As I read the jacket, I’m remembering and worshipping God for His goodness.)

The 2nd day of composing I struggled with what God called His valentine love song to His People, “Come Into My Chambers”. He taught me tenderly to wait (just like in intercession) and hear His voice and His melody line, then He would give the words. All I had to do was ask Him what key we were in and start penciling in the notes on the staff paper. He would not allow me to go any further until I heard the chord structures precisely. Later, I discovered the exact sounds He was developing with those chord structures. At 2:05 pm, I stopped and amazingly realized the 4th song was completed within the exact time frame of 5 hours. I rushed home to my children.

As I read this cassette album jacket remembering what happened between the Father and me during those precious days, I’m humbled to realize how He chooses to use frail humans to bring forth His message, His songs, His love. Oh, if I’d only read this jacket often through the years and remembered how gracious and patient and kind He is to work through a willing vessel. I only had to remain willing. Yes, I can go back now and see the mistakes I made thwarting His plans and purposes. There were times I’d resurface and obey, only to walk off the path and thwart things again. Yet, there is His Love again embracing me the minute I turn back to Him and surrender purposing to follow Him all the way this time.

The next days of composing with Him was nothing short of miraculous- and He even involved my husband, John, in one of the songs coming. What an amazing God – great and awesome – and He’s ours to love and enjoy and serve all the remaining days of our lives.

On the third day, I was so overcome with rejoicing from the previous days’ writings, I had to worship the Father on my knees before going on. I picked up the pencil and “You’re Brand New” floated onto the paper with a fresh new sound. That afternoon, the Lord revealed the order and number of songs to go on the album. Instead of eight, He wanted 10 songs. The album would begin with prayer, “The Lord’s Prayer” acapella, and end with worship, “How Great Thou Art”. Everything in between would be a fresh revelation of His character and the type of relationship He longs to have with His children. He said we would write the final songs on holiness and joy the next day. I so desired and even began to write on holiness, but He stopped me tenderly saying to my heart, “Let time this evening with your family develop all I want to say about holiness.” He then said we would go back to the songs on the first day and take my human frailness out of them.

That night I was so blessed. My husband John, who had started 7 days prior to me on a complete fast (no food), covering and supporting me in this project, began sharing all the Lord was revealing to him about “holiness”. I wrote key phrases and Scripture passages down as fast as he could share. The next morning, “Seek Holiness” fell on the paper in one hour. I realized that this song was as much for the Body of Christ as it was for the newly healed person willing to walk in the reality of their healing. The beautiful part was how the Lord worked through 2 vessels, a husband and wife, the one-flesh picture of the church, to write a song depicting where our life and benefits flow out.

The last song written was indeed a sound of joy bursting forth from the Father’s heart. “I Will Whistle” is a victorious picture of the Body of Christ, the church, God’s army on the earth, the pure bride of Christ, marching home and shouting “We win!”

Friday came, and worship was bursting from mine and John’s heart. I can claim no ownership of any of these songs. I held the pencil, but our heavenly Daddy wrote the songs to us. I had to learn these songs as I would any song preparing for the recording session set for February 14, 1993.

I had no desire to eat anything. I asked the Father, “Should I fast completely now?” I heard Him say in my spirit, “No, drink juice and eat 3 boiled eggs, one per meal. The number 3 stands for the GodHead. An egg stands for wholeness. I can’t explain it, but my body was completely satisfied.

The 7th day of my fast was a day of rest before the Lord. Satan was lurking about, trying to upset my rest in the most uncreative ways. Of course, he always overplays his hand with his accusations and discouraging remarks. If he could just get me to doubt my healing and fear man, God’s power would never be seen through this project.

I had to speak out exclaiming: “Get behind me, Satan. Look at the heavenly sky above, you devil. How long has God been God Eternal? FOREVER! That’s how long my healing is intact!”

Ironically, I used the same warring declarations weeks after Jalon’s death when Satan was trying to torment me while planting flowers around the pool where he died. “Satan, you can see in the spirit realm better than I. Jalon is not suffering in that pool. Jalon is alive with Jesus in his heavenly home. Now be gone with you!” I have never been tormented again about Jalon’s passing or where he is this hour. In fact, heaven is closer and more real to my heart the more I seek our Heavenly Father.

What’s my next step, Lord?

0 Replies to “The Story behind the album: “Do You Want To Be Healed?””

This site uses Akismet to reduce spam. Learn how your comment data is processed.